Steve “Captain America” Rodgers (Chris Evans) attempts to make a life for himself in the modern world but struggles to connect with those around him. Working for S.H.I.E.L.D. with Natasha “Black Widow” Romanoff (Scarlett Johansson), he becomes involved in a mission that seems a bit fishy. Later that night S.H.I.E.L.D. director Nick Fury (Samuel L. Jackson) is assassinated by The Winter Soldier (Sebastian Stan) but not before he warns Steve that the agency has been infiltrated and that no one he can be trusted. Now he must team up with Natasha and his new friend, former soldier Sam Wilson (Anthony Mackie) to figure out who is behind Nick’s death and stop a terrible future. But who is the mysterious Winter Soldier and why has he been implicated in over 100 years worth of assassinations? That’s all I am willing to tell you since it’s probably better to go in with as little knowledge as I did.  I’m not ashamed to say that I thought the first Captain America movie was painfully boring and that I might have had a little bit of a doze during it. So I wasn’t expecting much from Winter Solider. Imagine my surprise when it turned out to be exciting, action packed and full of political intrigue and twisty bits. Not only did I actually start to like Captain America but I enjoyed his interactions with both Natasha and Sam as well as Natasha’s growth as a character. I loved that bad guys were not completely bad, the good guys were not completely good and that there was no forced romance between the leads, despite their great chemistry. Dare I say I might have even liked Winter Solider a little more than GOTG? 3.5/5

Shall we just pack it all in and go and get some pasties?

In a weird, grey, dystopian setting dominated by bureaucracy, Simon James (Jesse Eisenberg) works in a government department, where he is all but invisible and longs for his neighbour and coworker, Hannah (Mia Wasikowska). One day a new worker starts in Simon’s department. He looks exactly like Simon and his name is James Simon. Simon is everything James is not – confident, outgoing, brilliant with women and very, very devious… and somehow no one seems to notice their physical similarities. Initially James responds to Simon’s attempts to befriend him but as Simon starts to take credit for James’ work and make inroads with Hannah he realises he is trying to take over his life. There were things I loved about Richard Ayoade’s adaptation of what is apparently a Dostoevsky novel. The grey-brown setting really brought across the soulless solitude of James’ life and the visual elements of his workplace were straight from the mind of Terry Gilliam. Eisenberg was the perfect casting as both creepy lead characters and I loved watching him play off himself. On the other hand I think Ayoade become so involved in making The Double  look right that he forgot  to make the story really compelling and it struggled to keep my attention. As much as I love a weird movie, this was a bit too weird and when it came to an end I wasn’t sure exactly what the point was. The Double may look a bit like Brazil but at best it’s a ropey photocopy. 2.5/5 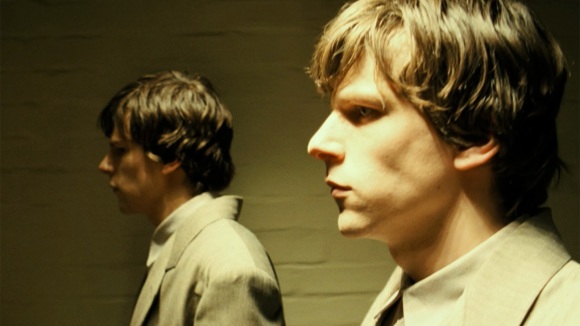 I reviewed the original Brian De Palma version of Carrie last week and since the plotline is identical I’m not going to go through it all again. This time Chloe Grace Moretz plays Carrie, Julianne Moore plays her mother, Ansel Engelort plays Tommy, Gabrielle Wilde is Sue and Portia Doubleday plays Chris. And it’s a fucking car crash. I love Moretz but she is completely miscast. Carrie is supposed to be a fragile, timid, wide-eyed little rabbit in the headlights but Moretz is just way too strong to potray this. No matter how much she stoops and mumbles you can’t look at her without expecting Hit-Girl to break out at any minute and just kick everyone in the tits. It’s also hard to imagine the whole period scene happening in 2013. I know they attempt to explain it away by claiming Carrie was home schooled but she didn’t live in a cave. Added to this Carrie is supposed to be slowly finding her burgeoning powers not going full Jean Grey halfway through the film. I also never felt that there was a chance that Tommy actually fancied Carrie, which was one of the joys of the original. Even Moore, who is normally great, seems to be phoning it in. This could have been an interesting remake if they’d tried to do an actual reinterpretation but a badly cast rehash just seems pointless. Rather just watch the original. 1/5

Does anyone have a wet wipe? I think I’ve spilled my wine.

After being expelled by the latest in a series of private schools, Charlie Bartlett (Anton Yelchin) finds himself attending public school. He immediately makes a bad impression, getting beaten up by Murphy (Tyler Hilton), wearing the wrong clothes and being a bit of a briefcase wanker. His disconnected but sweet mom (Hope Davis) sends him to a psychiatrist who diagnoses ADHD and prescribes ritalin. The drugs send Charlie absolutely loopy and he spots an opportunity. Soon he and Murphy are selling ritalin to everyone and Charlie a bit of a hero but when he is approached by Kip Crombwell (Mark Rendall), who is having panic attacks he feels compelled to help and in a few short steps Charlie has set up an amateur psychiatrist’s office in the boys’ toilets. His activities have not gone unnoticed by disaffected principal, Nathan Gardner (Robert Downey Jr) whose daughter (Kat Dennings), Charlie has fallen for and Nathan is torn between getting caught up in Charlie’s cult of personality and wanting to stop his disruptive behaviour. Soon Charlie has all but taken over the school but underneath his happy-go-lucky exterior is a lost boy who just wants someone to take care of him. I have to admit that I fell for Yelchin as Charlie Bartlett a little bit and I can imagine that if I were a kid at his school I would have been totally sucked in by all his crazy schemes and there is no question that Charlie’s heart is in the right place even if he doesn’t really have the maturity to understand the implications of his actions. I loved Dennings as the sassy but damaged Susan and Downey Jr is always affecting. If I have to cast a critical eye, I suppose Charlie is probably a pretty improbable character and some of his actions are unlikely but I could get past that and I hope you can too. 3.5/5

Well this is a bit shit…