One of my favourite people on earth to watch movies with is my bestie, Jen. Mostly we don’t really agree much on what we enjoy but when you have good banter and an inappropriate running commentary to share who cares? What we do agree on though is that there is no greater guilty pleasure than bad dance movies. Unfortunately I haven’t really been able to do any movie watching with Jen recently since the UK’s ridiculous immigration laws forced her to move back to Australia earlier this year. Fortunately for me she is currently in London visiting and staying with me. I decided the best way to help her get over her jet lag would be an all day marathon composed purely of cheesy, predictable and wonderfully brilliant dance movies.

Sean (Ryan Guzman) and his best friend, Eddy (Misha Gabriel Hamiliton) work as waiters in a swanky Miami hotel but spend their spare time dancing in a crew called The Mob, which arranges high impact flash mobs in the hope of racking up a high number of YouTube views and winning a contest. One day while having a drink at one of the beach bars at the hotel, Sean meets Emily (Kathryn McCormick), who impresses him by doing a dance that appears to involve simulating scrabbling sand from her vagina. What Sean doesn’t realise until the next day is that Emily is actually the daughter of Mr Anderson (Peter Gallagher) who owns the hotel and is none to pleased with Emily’s aims to become a professional dancer. Unperturbed Sean invites Emily to join The Mob but doesn’t tell any of his friends about her father. When the group discover that Anderson is going to develop a new hotel that will lead to the destruction of their neighbourhood, Emily convinces them to organise a flash mob to  disrupt the town hall meeting where approval for the project is being sought but what will happen when Eddy finds out who Emily really is and when her father finds out what she’s been doing with her spare time? There is no doubt that this installment of the Step Up franchise has some amazing group dance routines and it packed with eye popping tricks and it’s a lot of fun if you can forgive the cliches. Unfortunately all the characters are underdeveloped and there are so many supporting characters that it’s hard to actually keep them straight (in the words of Jen, why can’ they wear different colour hoodies?).  Not the worst of the day but certainly not the best. 2.5/5

When Sara’s (Julia Stiles) mother is killed on her way to Sara’s Julliard audition she is forced to move to Chicago to live in the ghetto with her dad (Terry Kinney) where she discovers she is basically the only white girl in school and nothing about her new life is familiar. Fortunately she is befriended by Chenille (Kerry Washington) and her aspiring doctor brother, Derek (Sean Patrick Thomas). Chenille invites Sara to a dance club where she realises that her ballet moves don’t cut it in the world of hip hop. Fortunately Derek is willing to coach her. Inevitably sparks fly and Derek starts to help Sara get over her guilt and consider going giving Julliard another go. Unfortunately not only is everyone not thrilled about Sara and Derek’s burgeoning relationship but Derek’s friend, Malakai (Fredro Starr) isn’t willing to let the past go, threatening both of their futures. The one absolute essential for a good dance movie is that the dancing is totally epic. It’s fine for the protagonist to start out a bit shit and then get good but they have to get really, really good and Julia Stiles just isn’t that good a dancer. She never looks completely comfortable doing any of the hip hop moves, which detracts from the overall effect. Save the Last Dance wants to be really gritty but it also lacks any actual threat to its characters so it just comes across as inauthentic. I remember loving this when it came out but it hasn’t aged well at all. Surprisingly the worst of the bunch. 2/5 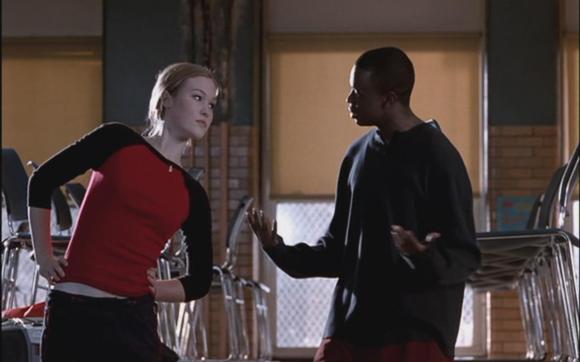 Could you try and make I’m a little teapot look just a little less white?

Jody Sawyer (Amanda Schull) gets one step closer to her ballet dream when she is accepted by the American Ballet Company. Here she meets her roommates, Maureen (Susan May Pratt), who has perfect technique and is earmarked for glory and Eva (Zoe Saldana), a promising dancer from the wrong side of the tracks with an attitude to match. While Maureen and Eva excel, Jody discovers that her technique is far behind that of her classmates. One day while attending an external non-ballet class, she encounters Cooper (Ethan Stiefel), a former student who is choreographing his own contemporary piece for the end of year showcase that will determine every dancer’s future. After Jody falls into an ill-advised romantic entanglement with Cooper, he casts her as the lead in his show, but is she up to the challenge? Will Eva’s attitude get in the way of her success? And what is hiding behind Maureen’s ice cool facade? Although Center Stage  is predictable and its characters are pretty two dimensional it feels like a fascinating and somewhat authentic look into the unforgiving world of ballet. It’s also exciting and sexy and the dancing is very impressive. An endlessly rewatchable dance movie classic. 3.5/5

All the boys love a girl in a red dress

After ballroom dance teacher, Pierre Dulaine (Antonio Banderas) witnesses Rock (Rob Brown) vandalising his principal’s (Alfre Woodard) car he decides to report it to the school and discovers that she is less than interested in following it up. He then decides that he could potentially give something back to the inner city kids at the school by offering dance lessons. Practical Principal James doesn’t see the value but she could use someone to take detention so she gives Dulaine a shot. At first his group of misfits, which include the sullen Rock are complete disinterested in Dulaine’s form of dance or his insistence on good manners but his endless enthusiasm soon starts to win them over. When he discovers that Rock’s and fellow student, LaRhett’s (Yaya DaCosta) brother caused each other’s deaths during a drug war, he puts his focus into healing their relationship through dance, potentially to the detriment of his paying students. As his students start to mix his music with theirs and develop a whole new kind of dance, Dulaine enrolls them in a contest but will the pull of Rock’s past life be too much?And will the class have what it takes to go up against students who have been practising for years? Banderas is funny and charming as Dulaine and unlike Save the Last Dance, the students lives really do come across as tough and dangerous, which helps you to form a connection with even the silliest of the supporting cast. Throughout the film you desperately want them to succeed. Believe it or not this is loosely based on a real story, which somewhat prevents it from becoming a complete cheese-fest and keeps it on the right side of heartwarming. 3.5/5