I know I was supposed to be doing villainous TV couples this week but the untimely passing of comedy legend, Robin Williams made me take a different tack. Although Williams probably never counted as one of my favourite actors, he is a powerful presence in movies I loved from my childhood and more recently and hearing he had passed hit me really hard. He just had a way of stealing the show even in the smallest of cameos. His loss is surely one that will be felt throughout the film industry for years to come. If anything positive can come from such a terrible loss I hope it will be that people start having more honest conversations about the devastating impact of  depression. Rest in Peace, you wonderful man. We will never forget you.

Alan Parrish
Film: Jumanji (1995)
“Alan Parrish: You think that mosquitoes, monkeys, and lions are bad? That is just the beginning. I’ve seen things you’ve only seen in your nightmares. Things you can’t even imagine. Things you can’t even see. There are things that hunt you in the night. Then something screams. Then you hear them eating, and you hope to God that you’re not dessert. Afraid? You don’t even know what afraid is. You would not last five minutes without me.”

Armand Goldman
Film: The Birdcage (1996)
“Armand: Yes, I wear foundation. Yes, I live with a man. Yes, I’m a middle- aged fag. But I know who I am, Val. It took me twenty years to get here, and I’m not gonna let some idiot senator destroy that. Fuck the senator, I don’t give a damn what he thinks.”

Sean Maguire
Film: Good Will Hunting (1997)
“Sean: So if I asked you about art, you’d probably give me the skinny on every art book ever written. Michelangelo, you know a lot about him. Life’s work, political aspirations, him and the pope, sexual orientations, the whole works, right? But I’ll bet you can’t tell me what it smells like in the Sistine Chapel. You’ve never actually stood there and looked up at that beautiful ceiling; seen that. If I ask you about women, you’d probably give me a syllabus about your personal favorites. You may have even been laid a few times. But you can’t tell me what it feels like to wake up next to a woman and feel truly happy. You’re a tough kid. And I’d ask you about war, you’d probably throw Shakespeare at me, right, “once more unto the breach dear friends.” But you’ve never been near one. You’ve never held your best friend’s head in your lap, watch him gasp his last breath looking to you for help. I’d ask you about love, you’d probably quote me a sonnet. But you’ve never looked at a woman and been totally vulnerable. Known someone that could level you with her eyes, feeling like God put an angel on earth just for you. Who could rescue you from the depths of hell. And you wouldn’t know what it’s like to be her angel, to have that love for her, be there forever, through anything, through cancer. And you wouldn’t know about sleeping sitting up in the hospital room for two months, holding her hand, because the doctors could see in your eyes, that the terms “visiting hours” don’t apply to you. You don’t know about real loss, ’cause it only occurs when you’ve loved something more than you love yourself. And I doubt you’ve ever dared to love anybody that much. And look at you… I don’t see an intelligent, confident man… I see a cocky, scared shitless kid. But you’re a genius Will. No one denies that. No one could possibly understand the depths of you. But you presume to know everything about me because you saw a painting of mine, and you ripped my fucking life apart.” 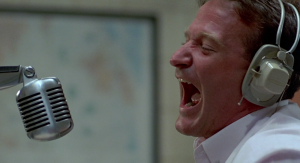 Peter Banning
Hook (1991)
Peter Banning: You’re a… you’re a complex Freudian hallucination having something to do with my mother and I don’t know why you have wings, but you have very lovely legs and you’re a very nice tiny person and what am I saying, I don’t know who my mother was; I’m an orphan and I’ve never taken drugs because I missed the sixties, I was an accountant.
“Tinkerbell: Guess again.
[Tinkerbell takes the sheet which makes Peter trip on the floor]
Peter Banning: [disoriented] Oh, look, stars.
Tinkerbell: That’s right, Peter, second star to the right and straight on till morning.
[Tinkerbell takes Peter by the strings of the sheet]
Tinkerbell: Neverland!”

Daniel Hillard / Mrs. Doubtfire
Mrs. Doubtfire (1993)
Mrs. Doubtfire: Can you help me with something, I found this outside.
[holds up Mercedes hood ornament]
Stu: Uh, yes, this is off my, uh, Mercedes.
“Mrs. Doubtfire: Off your Mercedes, dear, you own that big expensive car out there? Oh, dear. Well, they say a man who has to buy a big car like that is trying to compensate for smaller genitals.”