Seventeen year old Hazel Grace Lancaster (Shailene Woodley) has cancer, which is just about held at bay by an experimental drug although it’s inevitable that she will submit to her disease sooner rather than later. At the insistence of her mother (Laura Dern) she attends a support group where she meets eighteen year old cancer survivor, Augustus Waters (Ansel Engelort) – no it’s not weird at all that they played brother and sister in Divergent – who immediately sees a spark in her. The two spend more and more time together, sharing their interests, in particular Hazel’s favourite book, An Imperial Affliction – a novel about a cancer sufferer, which ends abruptly in the middle of the narrative. Augustus desperately wants to turn the friendship into something more but Hazel is terrified that her imminent death will break his heart and insists that they remain friends. What Hazel doesn’t realise is that Augustus has been contacting William van Houten (Willem Dafoe), the author of An Imperial Affliction, who is now a recluse in Amsterdam to try and find out how the story ends. Van Houten invites them to visit him and the two go on a trip that will change absolutely everything for them, in ways they never could have imagined. I have read the novel this is based on and I can confirm that it is a faithful interpretation with very little changed. It wasn’t my favourite book but Woodley and Engelort are very well cast and have excellent chemistry, which helps to create a really engrossing and heartfelt story. For me the most touching moments were not between Hazel and Augustus but rather between Hazel and her parents (played by Laura Dern and Sam Trammell). I maintain that Hazel is kind of annoying but Engelort completely won me over to Augustus. I do not understand what they did to Shailene Woodley’s hair though. I get that the character has short hair but there is more than one short haircut in the world and I’m not sure what was achieved by saddling her with the fuggliest haircut in the history of hair. It was so bad it was distracting. Anyway, as teen love stories go you could do a lot worse than this and if you enjoy it anywhere near as much as the teenage girls in the theatre next to me who giggled, gasped and sobbed all the way through you’ll have done well. 3.5/5

Public transport… the most romantic place on earth

After her mother dies Navy Admiral, Captain Sir John Lindsay (Matthew Goode) leaves his mixed race illegitmate daughter Belle (Lauren Julien-Box/Gugu Mbatha-Raw) in the care of his uncle  Lord Mansfield (Tom Wilkinson), who happens to be the Royal Chief of Justice. Belle, called Dido by her family, grows up alongside her cousin, Elizabeth (Sarah Gadon) and is given every education and privilege of a lady although she is not permitted to dine with the family and it is widely understood that due to the circumstances of her birth she will not marry and she is mostly sheltered from matters relating to Britain’s lucrative slave trade. That is until Lord Mansfield takes on vicar’s son, John Davinier (Sam Reid) as a sort of apprentice. Although Dido initially finds Davinier rude, there is a definite spark between them.  When pressed by Dido, Davinier describes to her the details of a case Lord Mansfield is presiding over which could upturn all legislation around slavery and this earns him banishment from their homes and her life. Soon after this Dido accompanies the family to London for Elizabeth’s coming out and the cousins attract the attention of the Ashford brothers, Oliver (James Norton) and James (Tom Felton – who is making a real career of playing absolute bastards). Now Dido must try to determine whether Oliver is only interested in her vast inheritance and whether society and even her own family will ever be able to look past her race. At the same time she cannot resist seeking out Davinier and more details on the case that could mark the beginning of the end of the slave trade. There are a lot of interesting themes at play about the concept of humans as property in this film, not only in terms of slavery but also the position of women in society along with the power of money to buy favour. Overall Belle is engrossing and the fact that it’s based on a true story lends it even more credence. Despite this, it did seem that some situations were contrived and overly convenient and it felt like the very simple narrative might not hold up to repeat viewings. A small complaint though for a well-acted, beautiful looking period drama with a strong message. 3.5/5 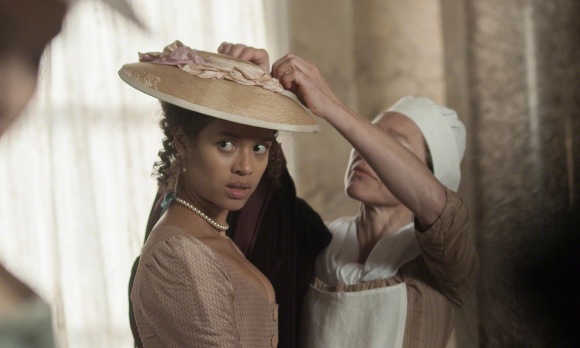 Bitch, you better stop looking at my hat like that…

Back in the early 90’s Gary King (Thomas Law/Simon Pegg) was a legend and the ringleader of a group of teenage boys in the village of Newton Haven. Twenty years later things are not going as well for Gary but he’s absolutely convinced that if he gets the old gang together to complete a mile long pub crawl that they didn’t finish in their teens everything will be well. Although Gary hasn’t moved on all his friends have. Steven (Paddy Considine) is a successful businessman, Oliver (Martin Freeman) is a slick estate agent and Peter (Eddie Marsan) and Gary’s best friend Andy (Nick Frost) are both married with children. Most importantly none of them is particularly keen on spending any time with Gary, who is frankly a terrible human being. However pity gets the best of them and they all end up taking up the challenge… but something very strange is happening in Newton Haven. No one seems to remember them and as they move from pub to pub the locals’ behaviour becomes progressively more odd. It’s not long before the gang finds themselves humanity’s last defense against being taken over by an alien force but Gary isn’t ready to abandon his quest to complete the Golden Mile, no matter who he has to fight through in the process. The World’s End got a lot of flack when it came out for not being laugh out loud funny but I thought it had some hilarious moments and the chemistry between the actors, especially unsurprisingly Pegg and Frost was excellent. I also liked that it was a deeper exploration into what it means to grow up, letting go of the past and the concept of happiness. Although Gary is a dreadful person, he is still sympathetic and it’s easy to cheer him on, even though his quest is ridiculous. Not as good as Shaun of the Dead but much better than Hot Fuzz. 3.5/5 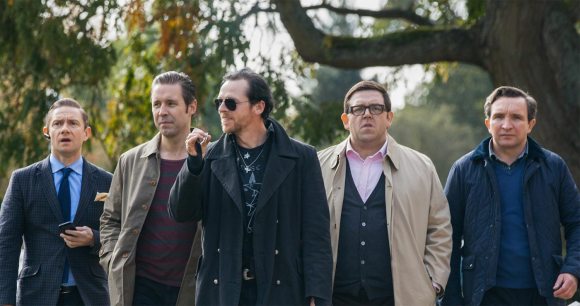 The dads are back in town!

In the last throws of World War II a group of teenage boys is enlisted by the German army to defend a bridge against the advance American army. Apparently this is a remake of an earlier original, which was absolutely brilliant. Unfortunately the remake is not. The storyline isn’t particularly coherent – even my WII expert husband got the location wrong at some point, there’s virtually no character development and the action falls completely flat. The majority of the story focuses around Albert (François Goeske) and his friend, Walter (Lars Steinhöfel). Albert is living with his classmate Paula’s (Paula Schramm) family after his home was bombed and has a rather large crush on her and Walter has been shagging his teacher Fraulein Bauer (Franka Potente), which is presented in a really weird creepy way. At first the boys are really excited about the idea of seeing some action and doing their bit for the fatherland but as they actually face a much better equipped enemy they realise they are about to face a night of hell which most of them won’t survive. At the same time the army is falling apart around them, the authorities are questioning whether they should have been sent out there in the first place and Fraulein Bauer is desperately trying to save her students. I know there is a message here about the futility of war and not sharing the family maid with your dad when it comes to blow jobs but it was really, really badly executed. I haven’t seen the original but it can’t have been worse than this so see if you can get your hands on that instead. 1/5

Yes, corporal lean your head back for the nostril inspection