In celebration of father’s day coming on Sunday and in honour of the two awesome dads in my life, my dad, Julian and my father-in-law, Alan – I present to you my top ten father daughter relationships from the movies.

Gru and Margo, Edith and Agnes
Voiced by: Steve Carell, Miranda Cosgrove, Diana Gaier, Elsie Fisher
Films: Despicable Me (2010), Despicable Me 2 (2013)
The connection: Although super villain, Gru initially adopts his three daughters to use them to get into his rival’s home, they soon become the centre of his life.
“Gru: Good night, Edith.
[gives her a good night kiss and gently pulls the beanie over Edith’s eyes]
Gru: Good night, Margo.
[gives her a goodnight kiss, but returns in suspicion]
Gru: Whoa, whoa, whoa, whoa, hold the horses. Who are you texting?
Margo: No one. Just my friend Avery.
Gru: Avery…
[confused]
Gru: Avery? Is that a girl’s name or a boy’s name?
Margo: Does it matter?
Gru: No. No, it doesn’t matter, unless it’s a boy!
Agnes: I know what makes you a boy.
Gru: [concerned] Uhh… Oooh… you… do?
Agnes: Your bald head.
Gru: [relieved] Oh… yes.
Agnes: It’s really smooth. Sometimes I stare it, and imagine a little chick popping out.
[imitating a chick]
Agnes: Peep-peep-peep.
Gru: Good night, Agnes.
[kisses her forehead]
Gru: Never get older.“

Walter and Kat Stratford
Played by: Larry Miller and Julia Stiles
Film: 10 Things I Hate About You (1999)
The connection: Walter initially comes across as super controlling but when he realises that his daughter is not her mother he learns to show his love by setting her free.
“Walter Stratford: You know fathers don’t like to admit it when their daughters are capable of running their own lives. It means we’ve become spectators. Bianca still let’s me play a few innings – you’ve had me on the bench for years. When you go to Sarah Lawrence, I won’t even be able to watch the game.
Kat Stratford: *When* I go?
Walter Stratford: Oh, boy. Don’t tell me you changed your mind. I already sent ’em a check.“

Jim and Sam Baker
Played by: Paul Dooley and Molly Ringwald
Film: Sixteen Candles (1984)
The connection: After Sam has the worst day ever her dad makes sure they have a little one on one time and gives her some great advice
“Jim Baker: [to Samantha] I don’t think I’ll be able to sleep if I don’t feel this little talk has helped ya. So would ya be a sport and lie to me?”

Damon and Mindy Macready
Played by: Nicolas Cage and Chloe Moretz
Film: Kick-Ass (2010)
The connection: Since the death of her mother, Damon has been training Mindy to be his superhero partner doling out a special brand of tough love and developing an unstoppable bond.
“Damon Macready: So… Have you thought a little more about what you might want for your birthday?
Mindy Macready: Can I get a puppy?
Damon Macready: [surprised] You wanna get a dog?
Mindy Macready: Yeah, a cuddly fluffy one, and a Bratz movie-star make over Sasha!
[Damon is stunned]
Mindy Macready: [laughs] I’m just fucking with you Daddy! Look, I’d love a Benchmade model 42 butterfly knife.
Damon Macready: [relieved] Oh, child… You always knock me for a loop!“ 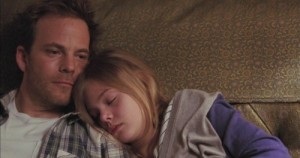 Johnny Marco and Cleo
Played by: Steven Dorff and Elle Fanning
Film: Somewhere (2010)
The connection: Movie star, Johnny is forced to assess everything about his hedonistic lifestyle when his ex unexpectedly leaves his eleven year old daughter, Cleo with him.
“Johnny Marco: Hi, Cleo.
Cleo: Hey.
[beat]
Cleo: Why are you taking a bath next door? Is yours broken?
Johnny Marco: …yeah.“ 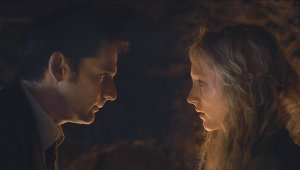 Erik and Hanna Heller
Played by: Eric Bana and Saoirse Ronan
Film: Hanna (2011)
The connection: Since the death of Hanna’s mother, Erik has been training her in isolation to become the perfect assassin with the sole purpose of getting revenge on her mother’s handler.
“Hanna: Adapt or die.
Erik: Think on your feet.
Hanna: Even when I’m sleeping.“

George and Zuzu Bailey
Played by: James Stewart and Karolyn Grimes
Film: It’s a Wonderful Life (1946)
The connection: Although George is close to all his children he has an extra special bond with little Zuzu
“George Bailey: Now, will you do something for me?
Zuzu Bailey: What?
George Bailey: Will you try and get some sleep?
Zuzu Bailey: I’m not sleepy. I want to look at my flower.
George Bailey: I know-I know, but you just go to sleep, and then you can dream about it, and it’ll be a whole garden.
Zuzu Bailey: It will?
George Bailey: Uh-huh.“

Hans Hubermann and Liesel Meminger
Played by: Geoffrey Rush and Sophie Nélisse
Film: The Book Thief (2013)
The connection: After Liesel loses her biological family she is suspicious of everyone but through her connection with her adoptive father, Hans, she learns to trust again.
“Liesel Meminger: I keep thinking about Max, wondering where he is.
Hans Hubermann: Me too. I’m not sure what it all meant. Everything he went through. Everything we did.
Liesel Meminger: We were just being people. That’s what people do.” 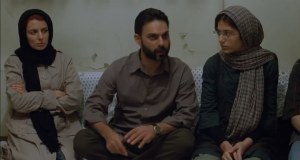 Nader and Termeh
Played by: Peyman Moaadi and Sarina Farhadi
Film: A Separation (2011)
The connection: Although Termeh is caught in the middle of her parents’ dispute, her father’s desire for her to do well and be independent never waivers and ultimately she prefers to live with him rather than her mother.
“Termeh: Didn’t you say it’s not serious?
Nader: It got serious.“

Tatsuao, Satsuki and Mei Kusakabe
Voiced by: Shigesato Itoi, Noriko Hidaka, Chika Sakamoto
Film: My Neighbour Totoro (1988)
The connection: When Satsuki and Mei’s mother falls ill, Tatsuao must take care of his two little daughters alone.
“Mei: Daddy, I’m scared the wind’s going to make the house fall down!
Father: (chuckles) Maybe it will, but I hope not, because we’ve just moved in.
(The wind shakes the house and blows things around)
Father: (laughs very loudly) Come on! What are you waiting for? You have to laugh loud to scare a spirit! (laughs very loudly)
Mei: I’m not scared at all.
Satsuki: (laughs very loudly)
Mei: Hey, I’m not, I mean it!“