Although it might seem like all of my life is taken up with movie watching, outfit picking, cooking and general mischief and nostalgia, I do occasionally involve myself in something a little bit more serious.

Almost two months ago a colleague of mine approached me about getting involved in a project he was working on. He (Jason) and I are both British Citizens who started our lives elsewhere. Me in South Africa and him in the United States. Over the years we have shared our immigration and visa woes and given each other tips on the best ways to jump through the UKBA’s (as it was then) various hoops. Jason’s friend, Katharine, was recently affected by the Family Migration Law of 2012, which specifies a minimum income of £18,600 p.a. for a British citizen in order for them to sponsor a non-EU spouse (increasing with every child where there are children). She has been married to her partner, Raco for over 18 months but he has only been allowed to live with her in the UK very recently.

Before I go into the project, I want to explain how unfair this law is in practice. First of all, 47% of all British citizens would not be able to meet this criteria and even worse, 61% of women would not be able to. Secondly the non-EU partner’s income is in no way considered. So even if the non-EU partner earns a gazillion pounds they would not be able to live with their partner and family. Thirdly it says in the EU Human Rights convention that you have the right to marry whomever you want and to have a family life. Deciding who gets to have human rights depending on their income is flat out wrong.

To make people aware of how British families are being affected, Katharine came up with the idea of getting people who have been separated from their families by the law to send in their love letters to be collated and published in a book called Love Letters to the Home Office. As someone who feels really passionate about Human Rights I was really excited to get involved and started out by doing some ghost writing and helping out with the social media, especially around our first petition urging for a change in the law.

The book, which you can and should buy here, has now been published and will officially be launched tomorrow night. While we were gathering stories of those who have been affected by the unfair Family Migration law of 2012, we realised that no one we encountered, including ourselves, had had a positive experience of dealing with the Home Office Visas and Immigration Section. So as part of the launch we decided to write a manifesto of how the Home Office should operate it’s visas and immigration section and that’s the second part of what I’ve been working on. Tomorrow night I will read out the manifesto that I have written with the help of Jason and Katharine and which is also available as a petition.

If this is something you also care about you can read the stories here, sign the petitions here and here, connect with us on Facebook and Twitter and even attend the launch if you’re based in London… and you can buy the book no matter where you live. 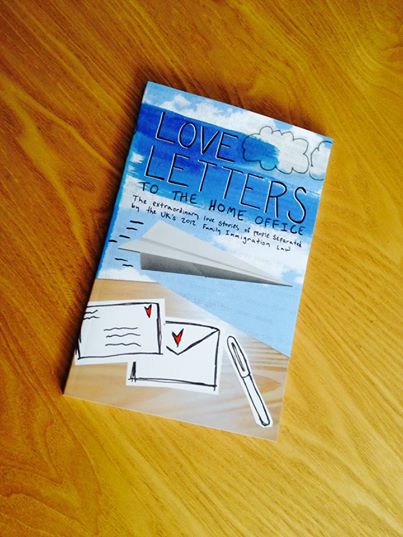