Violent young offender, Eric Love (Jack O’Connell) is transferred to an adult prison in the hope that they’ll have the resources to keep him under control. He immediately causes trouble, which piques the interest of not only the prison governors but also the resident top dog, Spencer (Peter Fernandino), who is in cahoots with Eric’s father Neville (Ben Mendelsohn), who also happens to be a prisoner. Still following? Nev becomes increasingly worried that Eric is going to get himself hurt and pushes him to attend an anger management therapy group, run by volunteer, Oliver (Rupert Friend). Here Eric starts to deal with some of the trauma of his upbringing, while connecting with other group members. Rather than being pleased, Nev is jealous which brings the relationship between Love Junior and Love Senior to a conflict that only one of them can win. Starred Up has a lot of potential. O’Connell and Friend are both strong and the guys who play Eric’s group members are fascinating to watch. However it feels like the potential is squandered by the brevity of the storytelling. There is so little exploration into Eric’s past that it’s hard to understand him or what has caused the break down in his relationship with his father. It’s obvious that Nev has issues of his own and has been absent but it’s feels like more could have been done. At the same time it’s hard to understand why Eric has been imprisoned for so long for a crime that to some extent comes across as self-defence. And then there’s Oliver, who clearly has an interesting past that is barely skimmed over. And just as the group gets really interesting, they just vanish. There’s no question that this is a dark, gritty look at the British correction system but it’s hard not to be frustrated by its short-comings. 2/5

“For the last time, I am not Orlando Bloom and if I have to hug this naked man to prove it… I will!”

All FBI agent Sarah Ashburn (Sandra Bullock) wants to do is be in charge. Unfortunately she doesn’t quite get the fact that she’s going to have to get on and cooperate with her colleagues to get there, which means she has a fair bit in common with territorial Boston PD detective, Shannon Mullins (Melissa McCarthy) who also doesn’t play well with others. Where the two don’t quite gel is that Ashburn is a stickler for the rules and Mullins sees them as a hindrance that doesn’t apply to her. When the two are paired up to take down a drug lord it’s clash city, but maybe if they can see past their differences they might both make the first friend they’ve ever had. There’s not much point in delving into the drug baron plot of this one since it’s ridiculously straightforward and the backbone of the film is really in the relationship between Ashburn and Mullins, which is pretty great. Bullock had excellent at playing the straight lady to McCarthy’s standard outrageous, foul-mouthed, oversexed wild woman. That said, I think I hyped it up in my mind a bit too much. I think I was expecting Miss Congeniality (which is one of my all time favourite guilty pleasures) and although The Heat was a lot of fun, it just didn’t quite measure up. Good but not great. 3/5 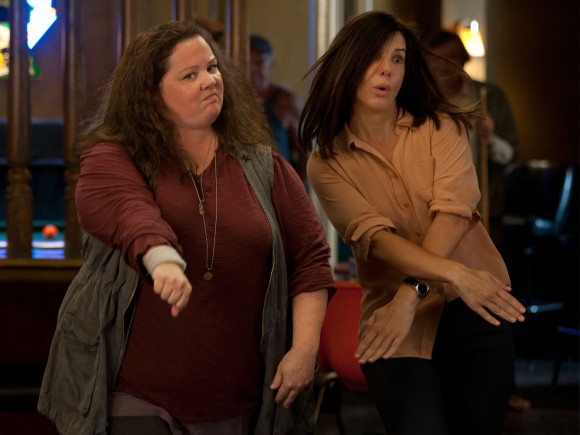 Yo, yo, yo! It’s about to cray up in this hizzouse!

When New Yorker, Jasmine’s (Cate Blanchett) businessman husband, Hal (Alec Baldwin) commits suicide after being imprisoned for dodgy dealings she is left alone, fragile and with no source of income. She decides to move in with her sister, Ginger (Sally Hawkins) in San Francisco while she gets back on her feet. Jasmine and Ginger have had very different lives. Jasmine sees herself as elegant, refined and her life with Hal has made her used to the finer things in life, from designer clothes to first class flights. Jasmine, on the other hand, works has a cashier, has two kids and is engaged to Augie (Dice Clay), who is a bit of a rough sort. As Jasmine starts to take over passive Ginger’s life, it becomes clear that she not only looks down on her sister but is also in complete denial about her situation, a level of denial she maintained throughout her marriage.  Blue Jasmine is really about the lengths that someone will go to to maintain the veneer of their life as everything crashes down around them. Blanchett gives an incredible performance as a woman who is so self-absorbed and entitled that despite her repulsiveness is fascinating to watch. I couldn’t tear my eyes away from the screen, particularly as Jasmine seamlessly reinvented her past to embark on a new relationship with a wealthy potential husband. A well-deserved Oscar. 4/5

During a Thanksgiving dinner the young daughters of the Dover and Birch families disappear. Suspicion is immediately cast on Alex Jones (Paul Dano), a local man with learning difficulties who was seen in the area at the time of the disappearance. While investigating detective Loki (Jake Gyllenhaal) doesn’t believe Jones is responsible for the abduction, Keller Dover (Hugh Jackman) is convinced that he is, which leads him to a terrible plan that will test his humanity to the limit. At the same time Loki follows-up multiple leads but as time starts running out, is he missing something right under his nose? And that’s about all I want to say about the plot to avoid any spoiling. What I will say is that this film keeps you guessing until the very end. I changed my mind about what was actually going on and who was responsible about twenty times throughout and I was still wrong. There are excellent performances from Gyllenhaal, who portrays Loki as a man teetering on the edge between following the rules and losing his temper, Jackman, who steals the show as a man who will do anything to get his daughter back – even if it destroys him as well as Dano, who manages to be both incredibly creepy and incredibly pathetic as Alex. Terrence Howard, Maria Bello, Viola Davis and Melissa Leo also provide a more than competent supporting cast. It’s been some time since I have watched a thriller this tense and exciting and I would highly recommend it. 4/5

Look, I wouldn’t be slagging off anyone else’s haircut with that beard, mate…