Some time ago the lovely Cinema Parrot Disco did a Top Five Movie Scenes of Self-Pleasure and I thought… what a frigging fantastic idea. So I’ve done my own version (I promise I don’t just spend all my time nicking other people’s ideas… it’s just that some of them are so darned good!).

India Stoker in Stoker (2013)
Played by: Mia Wasikowska
Subject of the self abuse: A murder India committed earlier… awkward
Scene of the crime: The shower
Caught by: A lucky escape
Props: No
“India Stoker: Have you ever seen a picture of yourself, taken when you didn’t know you were being photographed, from an angle that you don’t usually see when you look in a mirror, and you think: “That’s me… that’s ALSO me.” Do you know what I’m talking about?
Whip: I think I do. So you are surprised at yourself? Does that mean you are not afraid of being touched anymore?
India Stoker: Please don’t spoil it.“

Brandon in Shame (2011)
Played by: Michael Fassbender
Subject of the self abuse: Everything, it seems
Scene of the crime: Err… all over the place. Toilet cubicle being the one that stands out.
Props: None
Caught by: His own ailing conscience
“Brandon: Hey slut, wanna do it?”

Theodore Twombly in Her (2013)
Played by: Joaquin Phoenix
Subject of the self abuse: A woman in a chatroom… who wants to be choked by a dead cat
Scene of the crime: In bed
Caught by: Probably loads of CCTV cameras
Props: His communication device and earpiece
“Alien Child: I hate women. All they do is cry all the time.
Theodore: That’s not true. You know men cry too. I actually like crying sometimes. It feels good.
Alien Child: I did not know you were a little pussy. Is that why you don’t have a girlfriend? I’m going out on that date and fuck her brains out and show you how its done. You can watch and cry.
Samantha: Ok, this kid has problems.
Alien Child: You have some fucking problems, lady.
Samantha: Really? Ok, I’m gonna go.
Alien Child: Get out of here, fatty!“ 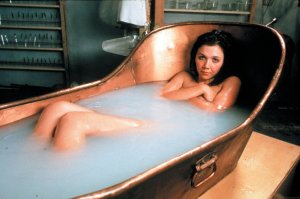 Lee Holloway in Secretary (2002)
Played by: Maggie Gyllenhaal
Subject of the self abuse: Being spanked by her boss
Scene of the crime: Her childhood bed
Caught by: Totally private
Props: A hairbrush
“E. Edward Grey: It’s your behavior.
Lee: What about my behavior?
E. Edward Grey: It’s very bad.“

Nina Sayers in Black Swan (2010)
Played by: Natalie Portman
Subject of the self abuse: Her fellow ballerina
Scene of the crime: Bed
Props: The whole bed
Caught by: Her mom
“Nina: It’s called privacy, I’m not 12 anymore!“ 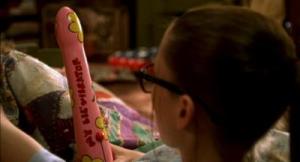 Anne in Elles (2011)
Played by: Juliette Binoche
Subject of the self abuse: The racy adventures of the prostitutes she is writing about
Scene of the crime: Bathroom
Props: None
Caught by: A victimless crime

Moff in Human Traffic (1999)
Played by: Danny Dyer
Subject of the self abuse: A dirty magazine
Scene of the crime: His bedroom floor
Props: Just the magazine
Caught by: His mom
“Moff: I’m making love to the music man. And believe me, I can go all night.“ 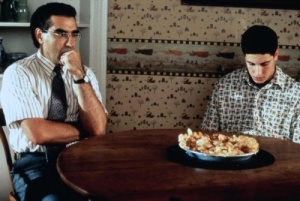 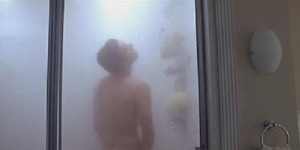 Lester Burnham in American Beauty (1999)
Played by: Kevin Spacey
Subject of the self abuse: His daughter’s pretty friend
Scene of the crime: The shower
Props: No
Caught by: His wife
“Lester Burnham: Look at me, jerking off in the shower… This will be the high point of my day; it’s all downhill from here.“