The second Hobbit film picks up where the first one left off, with the dwarves, Bilbo (Martin Freeman) and Galdalf (Ian McKellan) continuing their quest to claim the dwarf home world, Erebor, from a very naughty dragon called Smaug (voiced by Benedict Cumberbatch). After the company makes their way to the mysterious Milkwood forest, Gandalf leaves them to investigate the possibility that an old evil has resurfaced, intending to rendezvous with them at the Lonely Mountain. But before that happens they’ll have to get past some pretty scary forest dwellers, hostile elves and a band of orcs who just don’t know when to quit. I have to admit that I didn’t love An Unexpected Journey, most of it dragged on and on and the goblins were a bit crap and everything felt really padded. Fortunately I can say that Smaug delivers a lot more action and adventure and is consequently engrossing even at over two and a half hours in length. There were several moments where I felt properly anxious and both the orcs and Smaug himself are really scary (so is the CGI on Orlando’s face but we’ll just leave that be). Martin Freeman really comes into his own as he wrestles with his desire for the ring as well as the idea that Thorin (Richard Armitage) might just be using him. The only bum note comes in the romance between dwarf Kili (Aidan Turner) and elf, Tauriel (Evangeline Lilly). Their love just seems to develop way too quickly. They have one quite sweet moment and the next think she’s defying the king and taking on a legion of orcs to save him? It just feels like it could have done with a little bit more development. Putting that aside, the battle between the dwarves, elves and orcs that takes place as the dwarves are heading down the river in barrels is worth the admission price alone. Brilliant. 4/5

Legolas, I’m not trying to be funny but there’s something on your face

When conman, Irving Rosenfeld (Christian Bale) meets stripper, Sydney “Edith” Prosser (Amy Adams), he realises he has not only met the woman of his dreams but also the perfect partner in crime. It’s just a little bit unfortunate that he’s already married to the somewhat unstable Rosalyn (Jennifer Lawrence), but that’s the least of his worries when he and Sydney get done for fraud by ambitious FBI agent, Richie DiMaso (Bradley Cooper). But Richie sees within Irving the potential to go after bigger fish and offers them a deal if they help him entrap a New Jersey mayor (Jeremy Renner) in a corruption scheme involving a fake Emerati sheik. What Irv doesn’t realise is that Richie’s ambitions are even bigger than his hair and it’s not long before the mafia, various senators and even Rosalyn are involved. This crime caper is a riot of crazy action, twists and turns from start to finish, as well as presenting some real moral dilemmas. Both Bale, who sports an amazing comb over and paunch combo and Lawrence give impressive performances but it’s Adams who is the real star (not just because her boobs completely defy gravity… I was mesmerised by them) for me, although I have heard arguments for almost every member of this awesome ensemble stealing the show. Funny, wild and utterly engrossing. 4/5 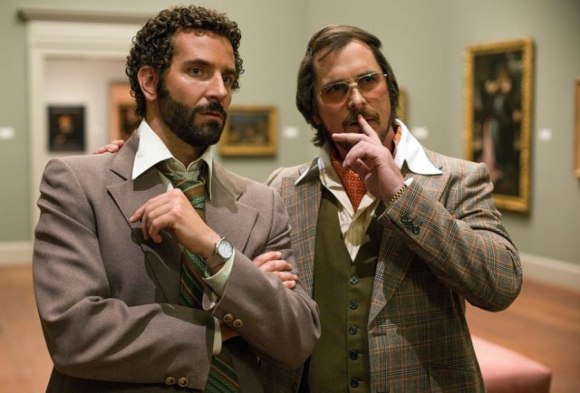 How IS she keeping her boobs up?

After serving together in World War II, Bob Wallace (Bing Crosby) and Phil Davis (Danny Kaye) form a song and dance troupe that takes America by storm. They meet a pair of beautiful performing sisters named, Betty (Rosemary Clooney) and Judy (Vera-Ellen) Haynes and decide to follow them as they head to a Vermont lodge to perform a Christmas show. In a dazzling coincidence, the ailing lodge happens to be managed by Major General Thomas F. Waverly (Dean Jagger), Bob and Phil’s former Commanding Officer. The pair decide its their duty to try and save the lodge by putting on a dazzling Christmas show, enlisting the help of the Haynes sisters. There’s no question that White Christmas is ridiculously cheesy but it’s also rather lovely. The singing and dancing is fabulous, as is the chemistry between the four leads.  If you’re looking for a Christmas classic, you could do a lot worse… just try not to focus on Vera-Ellen’s alarmingly small waist. Someone should have given that woman a sandwich!

I do declare, Phil, blue really is your colour!

After accidentally leaving young, Kevin (Macauley Culkin) behind on their Christmas vacation the year before, you’d think the McCallisters would be a little bit more vigilant with their children during their next trip. However somehow Kevin once again gets separated from his family and this time ends up alone in New York where he makes no hesitation in booking himself a suite in a fancy hotel, spending his parents’ money in toy shops and generally making a nuisance of himself. Little does he know the burglars who terrorised him the previous year are also in the Big Apple and keen not only to pull off a daring job but also to get their revenge on Kev. The first Home Alone movie is one of my favourite Christmas films but I’m not sure a second one was necessary. The return of the McCallister family makes you realise that they are essentially horrible, horrible people and it is probably their fault that Kevin is such a heinous brat. While Kevin’s cunning is fun to watch it doesn’t help that his attack on the burglars seems to go on forever and that they have a cartoonish inability to die no matter how gravely they are injured. Stick with the first one. 2/5