The Girl With the Dragon Tattoo

By now we all know the story, disgraced Swedish journalist, Mikael Blomkvist (Daniel Craig) is enlisted by aging business tycoon, Henrik Vanger (Christopher Plummer) to investigate the disappearance of his niece forty years earlier. Mikael enlists the help of damaged Goth, Lisbeth Salander (Rooney Mara) to help him and soon develops an unusual relationship with her as the two of them uncover a truth way more horrible than Henrik Vanger ever imagined. This is an odd one since it’s really well made and a fabulously intense watch. However, if you’ve seen the Swedish language original it’s hard not to spend the whole film wondering why they bothered. This is so similar to the original that it kind of seems like it was only done because Americans don’t like subtitles… and then you start to notice things like accent inconsistency… some people are putting on Swedish accents. Some people aren’t. If you haven’t seen the Swedish one you should definitely check this out. If you have, this doesn’t bring anything new. 4/5

What do you mean you wanted whipped cream and caramel syrup? Just drink the damned coffee!

After discovering that her boyfriend is cheating on her, Allison (Bridget Fonda) moves out and looks for a roommate. When she meets Hedra (Jennifer Jason Leigh), Allie thinks she’s found the perfect fit. Unfortunately Heddy is as mad as a bag of frogs, which becomes more and more evident as her behaviour becomes more erratic and scary. This is the original classic, scary friend movie and it’s pretty high on the creepy stakes… if you don’t find yourself wanting to throttle Allie for failing to notice that everyone in her life is dodgy. 2/5 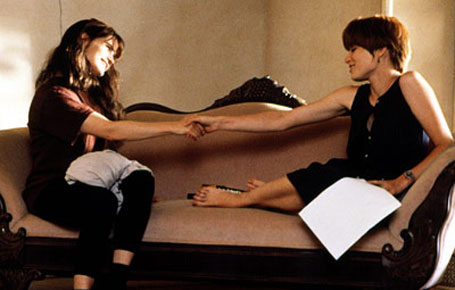 Actress, Amy Sumner (Kate Bosworth) returns to the redneck town she grew up in with her writer husband, David (James Marsden) while he works on his new film. It soon becomes very evident that David has little in common with the insular locals, including Amy’s ex, Charlie (Alexander Skarsgard), who appears to still have some strong proprietorial feelings towards her. Pranks escalate to violence and the Sumner’s marriage starts to suffer, but after things turn ugly at a football match matrimonial bickering is the least of their worries. The gender politics in this film are horrendous and if you have any feminist leanings its likely to make you feel a little sick. 2/5

After an independent secret service government contractor, Mallory (Gina Carano) is double-crossed by her “handler” (Ewan McGregor) she must unpick a series of twists and turns to find out who is really behind the betrayal in this fast-paced action film. With Michael Douglas, Channing Tatum, Michael Fassbender and Antonio Banderas all making an appearance there’s no lack of star power, however there is a predictable lack of character development. I am was very appreciative that they chucked in a speedy five minute explanation near the end of what was actually going on because I’ll admit that I had kind of lost track wondering when Mallory had found time to braid her hair into cornrows while on the run. Could have been worse. 2.5/5