Most of you who know me will be aware that my lovely husband, Paul recently went back to work after five months off to start his business. During those five months we experienced a bit of a spoilt state in our home. With him having extra hours in the day he was able to do most of the housework, leaving our evenings free and our flat actually quite clean…

Since he returned to work, I have to admit that things fell apart a little. Between our two full-time jobs, his eBay business and numerous social commitments, we have been less good. Not what I’d call filthy per say, just disordered.

As the disorder spiralled further and further out of control, depression started to set in until we were eventually glaring at each other over the piles of random randomness and hating life.

And so began the planning of The Great Clearout.

In some ways Mr Osbiston and I are very similar and in other ways we are very different. Two of these things were reconfirmed during The Great Clearout. Firstly, I am not sentimental in any way. I will throw away anything that isn’t useful. I don’t keep souvenirs or mementoes. Paul, on the other hand, is a little bit of a packrat. I guess we balance each other out. Without Paul, I’ll be the one throwing out our first child’s baby photos and then lamenting my over zealousness at a later date. Secondly I am quite untidy, okay very untidy, for a reason that seems a bit bonkers. I can’t be bothered to pack anything away unless I have the perfect place for it. This is in direct opposition to Paul who is a tidying machine, but will happily put things away anywhere he can’t see them.

Cue fireworks. I left a trail of destruction behind me as I figured out where everything was going to go… getting distracted by new and more things… and being baffled by the fact that I had found screwdrivers in the stationery draw and unimportant old post from our previous flat in the important documents draw. Paul stood aside begging me to finish just one thing and stop obsessing about labelling the draws.

In the end, we managed to laugh at ourselves and get rid of seven bags of unnecessary things and about 100 books that we’re never going to read again. Since we only moved just over a year ago, I’m not sure where half this excess stuff came from. I think it might be breeding secretly in the cupboards when we’re not looking. 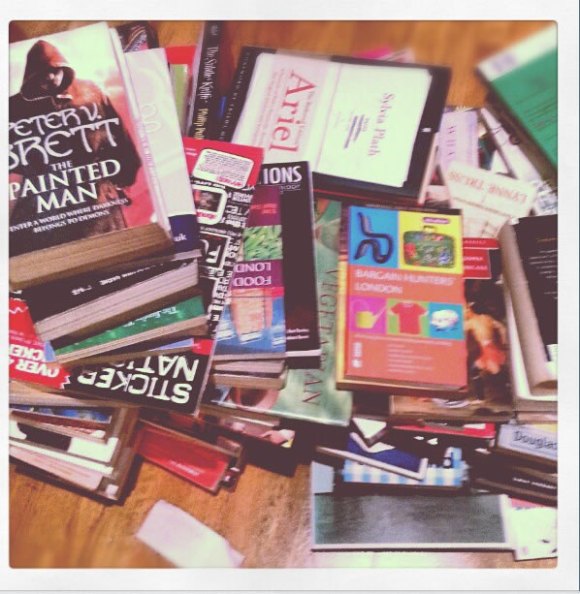 Of course 100 books are not easy to transport when you don’t have a car and we couldn’t face the idea of leaving them out, which lead to an episode of total chavviness… yes, kids, we “borrowed” a trolley from Waitrose (Orlando, put down the papaya!). If you ever need a mental image to make you laugh, imagine two harried, middle class South West London Suburbeners careering along Wandsworth High Street pushing a trolley full of books with the anti-theft clamps engaged. You’re laughing, aren’t you?

The thing is we kind of stole the trolley theft idea from the people two houses down, who permanently keep one in the front garden.

The upshot of all this, is that we managed to restock the library of the local Salvation Army… yes, I know they’re a religious organisation but we really couldn’t push the trolley any further. We were being watched by some very confused Community Support Officers and it was making odd noises #firstworldproblems. I also feel about a million times better in my newly decluttered home. I can even find my passport!