The Rules of Attraction
A group of beautiful, spoilt to the point of being semi-human students wander around self-consciously contemplating, love, sex, drugs and suicide before absolutely nothing is resolved. Set in one of Bret Easton Ellis’ mini-universes, this failed shock drama is packed with an early noughties cast that had potential but never quite made it… James Van Der Beek, Shannyn Sossamon, Kate Bosworth, Ian Somerhalder and by the same token the film also just quite live up what it could have been.  2/5 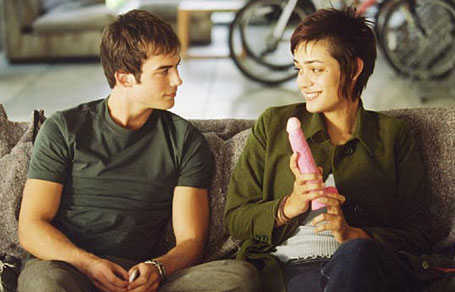 What do you mean? Of course it’s bigger than yours!

The Blues Brothers
On being released from prison, Jake Blues (John Belushi) discovers that the orphanage that he and his brother, Elwood (Dan Aykroyd) grew up in, is in danger of being closed for unpaid taxes. Desperate to help, the Blues brothers decide to get their old band together and put on a show to raise the money. It’s not long before the somewhat unsavoury brothers have made several enemies, none of whom are willing to let sleeping dogs lie – leading to all kinds of musical hilarity. This isn’t a particularly challenging comedy but you can see why it’s a classic. Definitely worth a watch. 3/5

Half Nelson
In a film primarily about juxtapositions and the dark and light of the human condition, teacher, Dan Dunne (Ryan Gosling) is both an inspired educator and a drug addicted. Disconnected from his friends and family, he forms a close – if somewhat inappropriate bond – with his student, Drey (Shareeka Epps) after she discovers his secret. As Dan gets more and more involved in Drey’s life he is desperate to pull her away from the influence of her jailbird brother’s friend, Frank (Anthony Mackie), while he himself is attracted to what Frank can offer him. Complex, thought provoking and dark, this is an intense but ultimately rewarding watch. 3.5/5

A Streetcar Named Desire
When Stella Kowalski’s (Kim Hunter) fragile sister, Blanche DuBois (Vivienne Leigh), arrives on her doorstep in New Orleans, she soon begins to upset the tenuous peace that exists between Stella and her brutish husband, Stanley (Marlon Brando). Resentful of Blanche’s intrusion into their lives and her upper class ways, Stanley becomes obsessed with delving into the reasons why Blanche has let go of the family home. Soon the careful veneer both Blanche and Stanley have built for themselves begins to tarnish under pressure, leading to an inevitable and explosive conclusion from which only one of them can emerge victorious. This is an absolute cracker, which slowly builds the tension to an almost excruciating point. The acting, especially from a menacingly beautiful, Brando is spectacular. Highly recommended! 4/5