Dwayne (Danny McBride) decides that his life would be a lot better if his father (Fred Ward) was dead and he could get his hands on his inheritance in order to fulfil his dream of setting up a tanning salon/brothel. But in order to get enough money together to pay a hit man, he’ll need to rob a band. Roping in his best friend, Travis (Nick Swardson), Dwayne embarks on the genius plan of kidnapping a pizza guy (Jesse Eisenberg), strapping a bomb to him and making him perform the robbery. Unfortunately the course to easy money never did run smooth and soon the plan starts to go very wrong. This was utterly ridiculous but surprisingly hilarious, mostly because of the chemistry between the cast members. Lots of fun. 3/5

In this feature-length outing of the popular TV show, Will (Simon Bird), Jay (James Cartwright), Neil (Blake Harrison) and Simon (Joe Thomas) head to Malia on a lads’ holiday. There’s sex, sun, sand and endless cringeworthy mishaps as the boys have one last hurrah together before they have to grow up and go their separate ways. Based on the reviews and the series I was expecting this to be hilarious but it’s surprisingly thin on laughs and charm and the extremely clichéd overly tidy ending sat quite uncomfortably. One can’t help but think it would have been a lot better condensed into a single episode.  2/5

Women of all ages, races and sizes… run!

The Wizard of Oz

When Dorothy Gale’s (Judy Garland) house is swept away during a tornado she finds herself in the magical land of Oz, where she’s heralded as a hero because she’s landed on and killed the Wicked Witch of The East. Desperate to get home she sets off on the yellow brick road to the Emerald City in the hope that the Wizard of Oz (Frank Morgan) will be able to help her. With her little dog, Toto in tow, she befriends a scarecrow with no brain (Ray Bolger), a tin man with no heart (Jack Haley) and a cowardly lion (Bert Lahr) who could also do with some help from the wizard. Their journey isn’t without peril as the Wicked Witch of the West (Margaret Hamilton) is out to avenge her sister’s death with the help of her extremely creepy flying monkey henchmen. It’s hard to judge a story that you know so well and which is so ingrained in popular culture but this classic adaptation is charming and has aged surprisingly well. Made me want to read the books again. 4/5

After falling asleep on the train platform, Kate (Franka Potente) finds herself trapped in deserted Charing Cross Station late at night. In her attempt to make her way out, she stumbles across a colleague who attempts to rape her but when she escapes she discovers there is something much more terrifying loose in the labyrinth of tube tunnels and corridors and that she’ll have to fight for her life if she’s going to make it to morning. Any kind of vague knowledge of the London Underground will have you scoffing at any of the happenings in this cut-price horror. The concept of the terror at being trapped in a tube station overnight isn’t a bad one but the execution in this instance is horrendous. A complete waste of time. 1/5 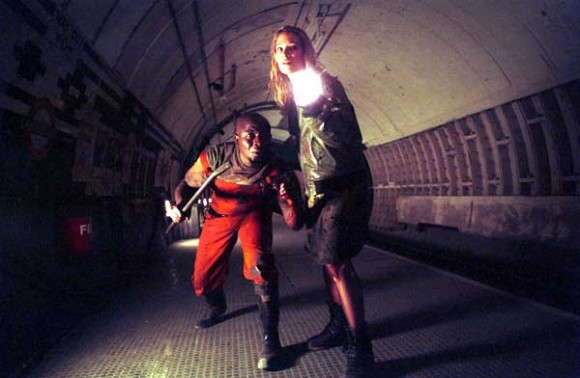