A young bank manager, Claire (Rebecca Hall) is kidnapped during a robbery. When one of the robbers, Doug (Ben Affleck) checks up on her later he finds himself falling for her without Claire realising who he is. Somehow with this description I’ve made The Town sound like a romcom but it’s far from that, combining Doug’s emotional rollercoaster – as he is torn between the idea of a life with Claire versus the environment he has grown up in – with some really tense action sequences. The characters show real development during the film and it’s a totally gripping watch. Highly recommended. 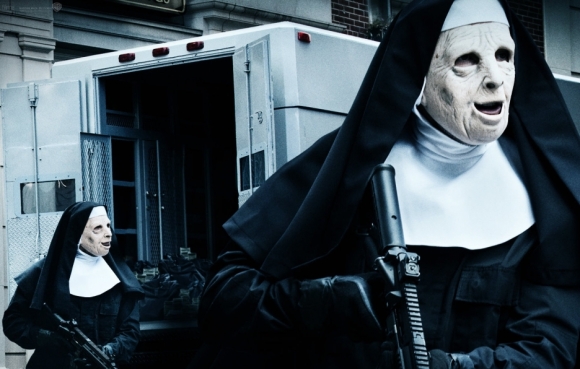 This is part three in the Meet The Parents franchise. Greg (Ben Stiller) and Pam (Teri Polo) are now the parents of twins. In the lead-up to the twins’ birthday party, Greg starts working with a beautiful sales rep (Jessica Alba) who is inexplicably besotted with him, everything goes wrong and Jack (Robert De Niro) is still banging on about the circle of trust. Although I like a bit of cringe comedy, The Fockers just aren’t funny anymore. Don’t bother.

Based on a true story, this slice of 60’s working class Brit drama follows the story of a group of female Ford factory workers who lead a strike against sexual discrimination. Rita O’Grady plays Sally Hawkins, the initially reluctant ring-leader of a local strike who discovers that women are paid less across the board, kicking off a worldwide equal rights movement. Pretty inspiring stuff and a sobering reminder of just how recently it was perfectly expected practise to just routinely pay women less on principle.

Give us equal pay or we will make you wear these hideous clothes!

A near-death experience leads David (Hayden Christensen) to discover that he can “jump” from one place to another instantaneously. Clearly bereft of any morals, David goes about robbing banks and eating burritos on international landmarks… until Roland (Samuel L Jackson), part of some kind of secret “jumper police” (sounds like the cardigan cops) catches up with him and wants to kill him. At this point he decides it’s time to look up his childhood sweetheart, Millie (Rachel Bilson) and take her to Rome on holiday, which she agrees to despite not having seen him in eight years… but Roland isn’t done with him yet. Maybe this worked as a book but between David being a completely unsympathetic character, Hayden Christensen being a terrible actor and the mythology being extremely patchy, it just really lacked substance. Don’t bother.

It's okay... I know I'm a twat. I've accepted it. If this relationship is going to continue, you need to accept it too.