The first St Trinian’s film was kind of cute and funny in its irreverent silliness but making a second one was just overkill. It smacks of an attempt to cash in and you can tell that it was a vastly inferior product by the fact that half the original cast didn’t return and those that did seem embarrassed to be there. There are secret societies and pirates and a treasure… and David Tennant, but not even he can save it. Avoid.

Made In Chelsea... Nights!

A young Vietnam War volunteer (a remarkably fresh-faced Charlie Sheen) finds himself in a platoon where the boundaries of right and wrong have been worn away by the horrors of war. When two rival sergeants (Tom Berenger and Willem Defoe) clash over the treatment of some villagers, the platoon must take sides with fatal consequences. This seminal war film personifies the genre and is a must-see, although be prepared to leave feeling utterly disgusted with humanity.

Bradley Cooper plays an unemployed writer who is introduced to NZT, a drug that allows him to use 100% of his brain. Soon he is rich and successful beyond his wildest dreams but when the side-effects of the drug manifest themselves he realises he might be in way over his head. This actually really wasn’t bad. Cooper is believable as both a loser and a slick genius and although I initially scoffed at the ending, in hindsight it was actually rather clever. The only real downside is the lack of chemistry between Cooper and Abbie Cornish, who plays his put-upon girlfriend.

And den de wurds just fallz from de sky... and dat's how I writez de book

In order to clarify which one of the numerous adaptations of Emily Brontë’s Gothic novel, I’m talking about. This is the 1992 version, starring Juliette Binoche and Ralph Fiennes as cursed lovers, Cathy and Heathcliffe. We all know the story, posh Cathy falls in love with her wild foster brother, Heathcliff. Cathy spurns Heathcliff for more refined friends, Heathcliff takes umbrage and runs off, only to return and ruin everyone’s life out of spite. This should have worked but Fiennes isn’t broodingly beautiful enough to pull off Heathcliffe (I keep looking at him and seeing Voldemort) and I’m pretty sure, Yorkshire lass, Cathy didn’t have a thick French accent… read the book. 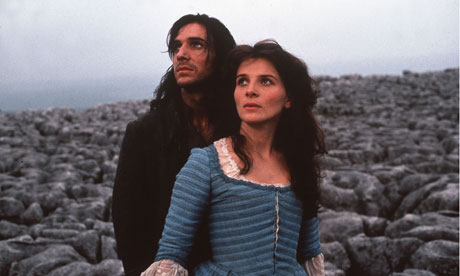 And this year's Oscar for best use of Smell The Fart Acting goes to...