After the surprise success of low budget, 28 Days Later, some movie exec’s eyes must have lit up with the word “SEQUEL” and so we have the not entirely logical 28 Weeks Later, now with added explosions and unnecessary Americans but minus character development and a coherent story line. I was particularly indignant about the bit where they end up attempting to get from what is obviously Charing Cross to Wembley Park by walking underground on the tube… there are so many flaws in the idea of a two children with nothing but a night vision sight on a gun being able to manage this that I could go on for half an hour (but I won’t). All of that said though, it’s not a terrible film. It’s just not comparable to its predecessor.

Bob had made his mind up, he was never going to over 40's speed dating again

I’ve been avoiding Inviticus for a while now. I’m not generally a big fan of American made South African movies… they just don’t get our psyche. However this dramatisation of the uniting power of sport in the lead up to the 1995 Rugby World Cup is actually quite sweet. Morgan Freeman plays the newly elected Nelson Mandela, facing the daunting challenge of getting South Africa through the transition from Apartheid to democracy without everyone killing each other. And Matt Damon plays the then beleaguered, South African rugby captain, Francois Pienaar. If you can look past Morgan Freeman’s atrocious accent and a bit of rose-tinting of the facts it’s not a bad watch, especially if you, like me, remember it all first hand. 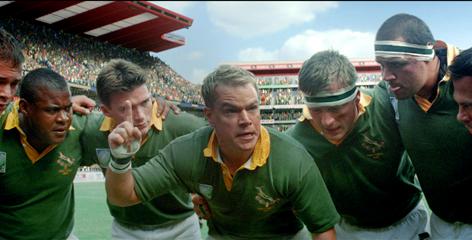 Remember guys... our posts are on the RIGHT hand side of the field!

How To Train Your Dragon

I’ve said it before and I will say it again. I don’t like animated films. How To Train Your Dragon might be one of the few exceptions. You have to look past the fact that the Viking adults have Scottish accents (??) and the children have American accents but once that’s out of the way, this tale of a boy and his dragon is both hilarious and moving. Jay Baruchel voices, Hiccup, the son of a Viking chief (voiced by Gerard Butler) hell bent on eliminating the dragons that terrorise their village. When Hiccup, who also happens to be a walking disaster and a bit of an outcast, captures a mysterious Night Fury dragon, he forms a friendship that challenges everything he thought he knew.

Did you leave the gate open?

In this creepy, atmospheric thriller, Sam Rockwell plays an astronaut on the solo three year mission to mine the moon, with only an interactive robot called GERTY (voiced by Kevin Spacey) for company. When he starts experiencing strange events he begins to wonder if the isolation is affecting his sanity but the truth is far more horrible than he ever imagined. Sam Rockwell is EXCELLENT but I’m not sure if I enjoyed this. It was really quite disturbing.