The last time Green Day live was in 2005 at the Milton Keynes Bowl. I had been in London for about a year, I hadn’t been to many gigs yet because the sub-mainstream music scene was still a mystery to me and I didn’t realise just how big a spectacle I was witnessing at the time. Going back 5 years later to Wembley Stadium, I will admit cynicism… I mean, I’ve seen it all right?

The opening acts were good… if unexpected. I’d heard a lot about Frank Turner without actually having heard Frank Turner and he certainly held up his said of the folk-rock bargain and I wouldn’t mind checking out some more of his stuff.

Joan Jett was surprisingly fabulous. She’s like a female Iggy Pop all sinew and attitude and you’d be surprised how many Blackhearts songs you actually know. I have every intention of exploring Joan’s back catalogue.

I don’t normally like “showy” rock. I don’t like over elaborate sets or gimmicks because most bands can’t pull them off. It’s like being covered in tattoos (I said COVERED) or having purple hair… it ends up wearing you rather than you wearing it. However, on Saturday we were truly in the presence of greatness… and as cynical as I have become, I was reminded that there is no greater natural rockstar than Billy-Joe Armstrong. Let’s face it, Green Day pull out every gimmick in the book… from hauling fans on stage to bashing the government, to waves of vastly unnecessary pyro, to ridiculous cover versions and dress-up kit and switching instruments… it’s all there in spans… and it’s as cheesy as fuck but it’s wonderful. We screamed and cheered and ah-ed with everyone else and despite the fact that there were 98,000 people there, I think I speak for myself, Yvonne and Jen when I say that it felt like we were right there on stage with them. And if you can play for three hours with that much energy when you’re pushing forty, you deserve to be the biggest rock band in the world. I’ve been a Green Day fan for 16 years and no one has topped them for me yet. 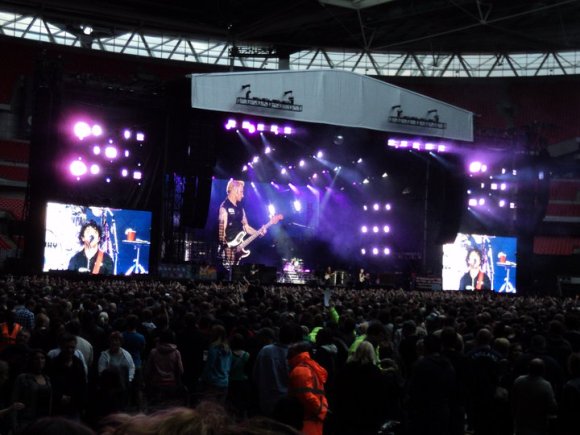