Death Proof
One half of the Grindhouse double feature, this split story follows a scarred (and deranged) stuntman who stalks beautiful women with the aim of killing them with his “death proof” car. That’s about the whole actual storyline of this vehicle for really random dialogue. Only Tarantino can get away with this. I loved it.

Look, it's a simple question... have you or have you not been riding dirty?

Planet Terror
On the other side of the Grindhouse scale is Robert Rodiriguez’s Planet Terror where a biological weapon is released turning people into brain-eating zombies and then the survivors fight back. I get the impression that Rodriguez has some kind of bizarre fantasy involving a woman with a machine gun leg and this was just an excuse to get, then girlfriend, Rose McGowan to agree to it. This film was just a bit too over the top for me and way too revolting. 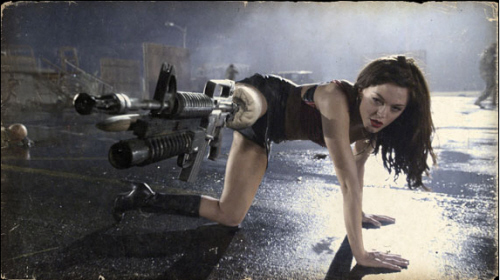 Shot through the heart and you're to blame, darling you give love a bad name

Havoc
I’m trying to figure out why on earth Anne Hathaway and Joseph Gordon-Levitt agreed to be in this. Unless she had a desperate desire to get her tits out and he really always wanted to carry a pimp cane. A couple of bored rich girl wiggers, become obsessed with a group of Hispanic East LA gangsters. They start hanging out with them… shit goes wrong. This could have been great but they completely pussied out on integrity of the story, the characters were so awful that you half-hoped the gang would murder them and the ending was incomprehensible. If you want a teen-shock drama watch Kids or Thirteen. If you do want to see Anne Hathaway’s tits though this is the perfect opportunity.

Hey, do you think if they make a British version called Chavoc, they'll let us be in it?

Heat
I know this is supposed to be like the best cop thriller everrrr and it has Al Pacino, Robert De Niro, Jon Voight, Val Kilmer, Ashley Judd and Natalie Portman in it but about 2 hours in I got bored stopped caring which side of the law won. Then again, I just don’t really enjoy this genre of film at all. If you do like action-packed, psychological, cop movies with really manly characters brandishing their guns and considering their duty, this is definitely for you.

So level with me... is this a date or are we just friends?